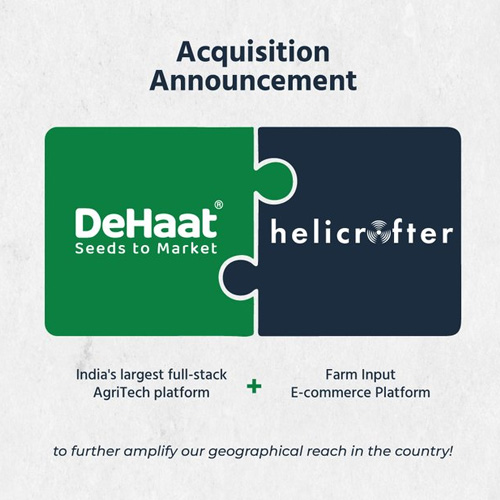 Currently India’s largest full-stack agritech startup, DeHaat has successfully pioneered the tech revolution across major agricultural belts of India. They serve over 700,000 farmers across Bihar, Uttar Pradesh, Jharkhand, West Bengal, Odisha, Madhya Pradesh and Rajasthan. The addition of Helicrofter to their roster comes in line with the overarching goal of geographical expansion, as it marks DeHaat’s entry into Maharashtra. Founded in 2020 by Siddhartha Choudhary, Helicrofter is a farm input e-commerce platform designed to do away with supply chain inefficiencies in the rural ecosystem. Despite the pandemic, Helicrofter has been generating revenue since the very first month of its inception and has achieved annual revenue in excess of Rs. 50Cr. Prior to this, Siddhartha was the CEO at DestaGlobal, a farm input e-commerce startup, where he played a critical role in building the complete tech stack for input market linkage and enabling the company to drive revenue. He started his career with Monsanto where he worked as Product Manager for Cotton and Vegetable business.

DeHaat provides farmers with access to over 3,200 agricultural inputs, combined with AI-based customised crop advisory on pest & disease management, delivered via mobile app and call centres. The platform also aggregates 30+ crops from farmers on their network and directly supplies it to over 600 commodity bulk buyers, including retail chains, e-commerce players, FMCG giants, and SME food processors. In the last six months, DeHaat has also integrated financial services into its list of offerings. Having been backed by some of the biggest names in the business like Prosus Ventures, Sequoia Capital India, RTP Global, FMO and Omnivore, DeHaat closed their latest round of funding in October of 2021 by raising $115 Mn led by Sofina and Lightrock.

Speaking on the acquisition, Amrendra Singh, Co-founder – DeHaat, says, “At DeHaat, we have built a crop and service agnostic, farmer-first model. Owing to our full-stack approach, we have been generating amazing responses from all our new, as well as existing geographies. We have been consistent with 35-40% growth in our network on a Month on Month basis, and this acquisition will cement our footprint into Maharashtra and thereby the Western part of India, which forms a major agri cluster for the nation. Over the years, DeHaat’s micro-entrepreneur network has grown to 4000 in Eastern and Central parts of India. With the addition of Helicrofter’s network, we will now add a wide range of prospective micro-entrepreneurs from Western India to this list.”

Commenting on the acquisition, Siddhartha Choudhary, Founder, Helicrofter adds, “We, at Helicrofter, are delighted to be joining hands with DeHaat. This union will undoubtedly help us add more value to the farmers and other stakeholders by strengthening our offerings, and accessing the wide variety and quality of services, as well as network access, that DeHaat possesses. What makes this partnership even more ideal for us is the complementing ideologies and synergy of function that will enable us to work together in materialising our vision for the farmer communities that we jointly serve. I am happy that all employees of Helicrofter are settling in well and are eager to scale DeHaat to newer heights.”

Nikhil Toshniwal, Co-founder, FarmGuide, says, “The last 1 year of working with DeHaat has been a very gratifying experience. Sheer knowledge of the colleagues and collaborative work culture have given an entrepreneur like me immense opportunity to sharpen the skills & continue experimentation. Exciting challenges are consistently posed and resolved, making it an extremely potent and dynamic environment to work in. Building tech-enabled convenience for farmers and an agri-stack platform was at the core of our offerings at FarmGuide, and I am super excited every single day to see them amplifying our growth plan at DeHaat to reach millions of the farmers. I am sure many other entrepreneurs like me who are part of DeHaat resonate with the fact that our skills and enthusiasm are on a growth journey with the organization.

This is the 3rd acquisition for DeHaat on their path for inorganic growth. Just last year, they acquired FarmGuide, which allowed them to integrate Satellite-based crop advisory solutions for farmers. Being well capitalised and the largest full-stack agritech player in the business, DeHaat is aiming for a pan India expansion of farmer communities & its Micro-Entrepreneur network over the next 10-12 months.