Our phones are being tracked through Pegasus says, CM West Bengal 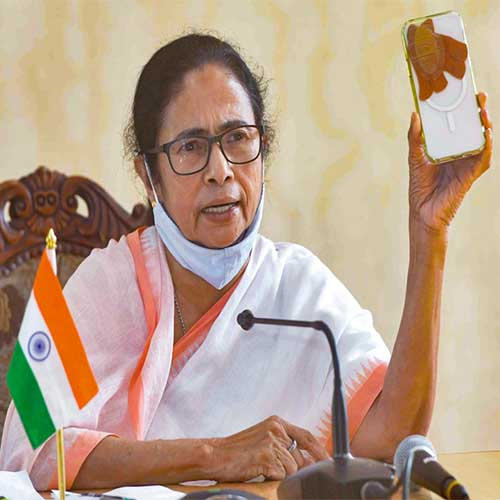 West Bengal CM Mamata Banerjee said while addressing a rally in Bhabanipur, on Friday claimed that phones were being tracked through Pegasus and that "there is no law in BJP’s rule".

Banerjee further said no inquiry was initiated against the Communist Party of India- Marxist (CPI-M) even though it was involved in a lot of injustice. “The CPM has done so much injustice, has there been a single CBI inquiry and ED case on them?

Our party, which fights with such bravery, is not being spared. Our phones are being tracked through Pegasus,” she said.

Speaking at a public meeting in Bhabanipur, she said, "All our phones are being tracked through Pegasus. They know what you are talking with your wife. Phone cameras are being kept on. You think it's switched off, but no, you are being watched.

They are scanning everything like Aadhaar. They may scan our brains and come to know what we are thinking.

West Bengal Chief Minister Mamata Banerjee stated that complete transparency should be maintained in the transactions made with the money collected by PM Cares Fund.

The Chief Minister Relief Fund is regularly audited. PM Cares Fund was formed for Covid-19, but yesterday they (Centre) told the court that it is not a government fund. Government employees have donated money there, funds through CSR have been donated there, lakhs of crores of rupees have been donated. So where is that money?" she asked.

She asked the people of Bhabanipur constituency to cast their votes even if it rains on the day of polling or else Bengal's development will be halted.