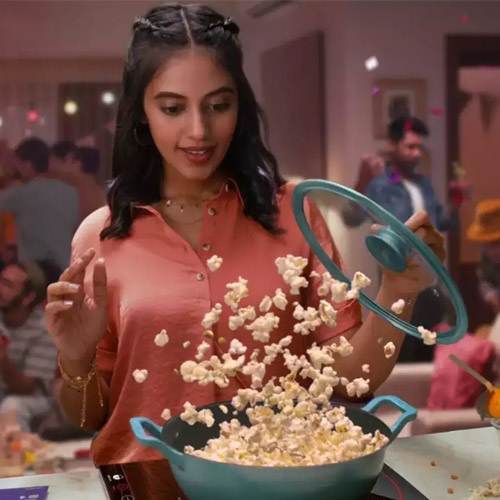 In a move to capture the cricket momentum, slice, India’s largest credit card challenger, launched its first ad film on Disney+Hotstar. With an aim to expand its reach among millennials & gen z in India, slice’s ad films will play on Disney+ Hotstar during Cricket Match between 19th September – 15th October 2021 and will also be promoted across digital platforms like Youtube and Facebook.

In a series of quirky, 20-second films, slice puts the spotlight on its super card’s key USP - its speed! With “Makes everything else seem slow” as its theme, the campaign highlights how the slice super card is different from traditional credit cards by focusing on how it makes the world faster and instant for today’s generation. Conceptualized and created in partnership with 82.5 communications, the ad films aim to show the world from the point of view of millennials and gen z in India. The first ad opens with a relatable scenario like a house party, where everything, except the slice card user, is in slo-mo. The slice card is designed to cater to this generation’s desire to make the most of their now and their need for instant gratification.

Commenting on their first ad campaign, Rajan Bajaj, Founder & CEO, slice, said, “From the fastest onboarding experience, instant rewards and cashbacks to the quickest customer service, the slice card is designed to be the ‘fastest’ card in the market in every way for millennials and gen z. We believe that speed plays a critical role for today’s generation and we want to be with them every step of the way. This is also crucial to ensure this set of consumers have a delightful customer experience, where all their needs are addressed instantly to help them make the most of their NOW.”

slice recently launched credit limits as low as INR 2,000 to go after 200 mn eligible Indians. Currently, slice has recorded a 50% m-o-m growth with an NPA of less than 2%. The slice super card is created to be the fastest & most rewarding card for all users, irrespective of their credit limit. Every slice member gets up to 2% instant cashback, unique offers across popular merchants like Myntra, Zomato, as well as the option to slice their bill into 3 months without any extra cost.