Study: Trust in Cloud Providers Is Not an Issue with Developers, Until It Is 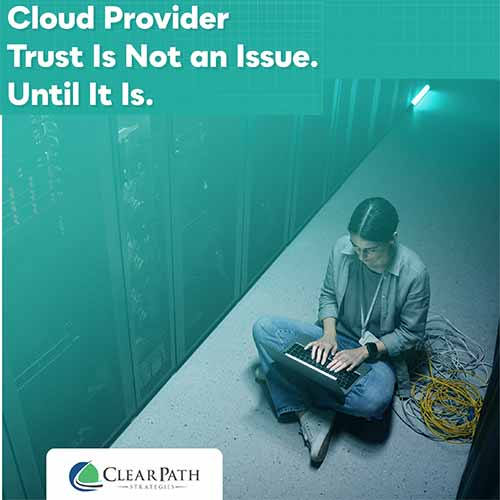 ClearPath’s study gathered insights from more than 800 developers at small and mid-sized businesses (i.e., less than 500 full-time employees) in a wide variety of industries and geographies around the world.

The study found that although SMB developers voice trust in their provider of choice in general, a deeper examination of their values uncovers a trust issue when it comes to major cloud providers.

“Approximately 20% of developers believe that the Big 3 hyperscalers will engage in behaviors that include leveraging their brands to stifle competition, focusing on shareholders more than customer needs, hosting or working with customers that developers find morally objectionable, monetizing user data for their own use, and locking them in with proprietary tools,” said Stephanie Fairchild, senior analyst at ClearPath Strategies. “Criteria such as security and performance clearly take priority over these trust issues for developers, but it’s interesting to note that a sizable portion of developers are thinking about how their values align with those of their service providers.”

“It’s no secret that the extensive functionality and brand awareness of hyperscalers make them popular choices for developers, but their standing with SMBs weakens with respect to values,” said Blair Lyon, vice president, cloud experience, Linode. “An alternative cloud provider like Linode can be a more trustworthy partner for innovative upstarts-one that offers predictable pricing and doesn’t threaten or compete with their business. And when an alternative cloud provider such as Linode meets a developer’s functional needs-which is nearly always the case-developers can have the best of both worlds: a provider they can trust to meet their needs and one that shares their values as well.”

Additional findings of the Clearpath study include:

The survey reveals that trust plays an important role in developers’ choice of a cloud hosting provider but needs take precedence. When prioritizing needs or values, developers report they prioritize needs over values 73% of the time.

The Top 3 reasons cited for developers’ preference of their chosen third-party cloud provider: (1) security; (2) trust; and (3) quality of service.