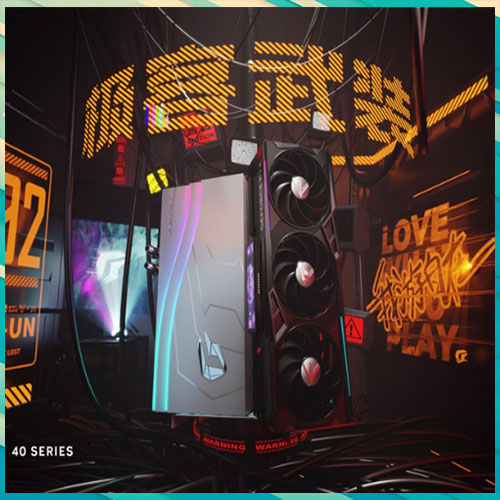 The graphic cards are powered by the new ultra-efficient NVIDIA Ada Lovelace architecture. The 3rd generation of RTX, GeForce RTX 40 Series graphics cards are beyond fast, giving gamers and creators a quantum leap in performance, neural rendering, and many more leading platform capabilities.

The new Vulcan Series graphics card features the new Hurricane Scythe Blade - an improved fan blade design that produces more airflow at lower noise levels compared to the previous generation Storm Chaser fan design. The new Vulcan Series graphics card features the all-new iGame Smart LCD – a detachable magnetic display. By default, the iGame Smart LCD is installed on the Vulcan graphics card and can be mounted horizontally or vertically. The detachable display can be placed on the included display dock as a stand-alone customizable screen that users can place on their desk.

The iGame Smart LCD is connected via USB and the included Vulcan Lightboard replaces the iGame Smart LCD on the graphics card when removed and placed on the dock. The iGame GeForce RTX 40 Series Vulcan is fitted with two low-key RGB strips that are customizable via the iGame Center. The graphics card adopts a flow-through cooling design that has proven to be more efficient in dissipating heat while at the same time providing better airflow inside the chassis.

The all-new iGame GeForce RTX 40 Neptune Series graphics cards will be sporting a new look and an upgraded liquid cooling solution compared to the previous generation. The slim 2-slot graphics card comes with a metal cover with a matte finish – two RGB light strips run through the cover that provides ambient lighting. The RGB lighting is fully customizable using the iGame Center app.