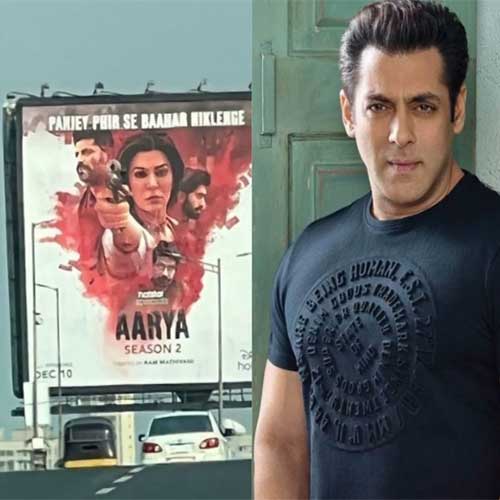 Sushmita Sen’s latest show, Aarya 2 has premiered on Disney+Hotstar and Salman Khan can’t stop praising her looks which he absolutely loves. The actor complimented Sushmita while sharing her picture and Aarya 2's hoarding on his Instagram handle.

The actor wrote, “Arre wah Sush how nice u looking ya. Totally killing it. So happy for u. @sushmitasen47 (sic).”

The actress on her part responded with the sweetest message. Calling him ‘generous and loving’ the actress said, “Thank you sooooooo much Jaan Meri!! Generous & loving as always!!! #cherished (sic).”

The Disney+Hotstar series premiered on December 10.

Salman Khan and Sushmita Sen are known to share a great bond. The actors have worked together in films like Biwi No. 1, Maine Pyaar Kyun Kiya and are often seen supporting each other on social media.

Sushmita Sen hopes that viewers will appreciate Aarya's fierce and unapologetic self in Season 2. She said, "After being nominated for the previous season for the International Emmy Awards, we are supercharged for the second season. Season 2 is not just about Aarya, a strong woman but also a warrior. The new chapter is a fascinating revelation of the character and has proved to be a huge learning for me as an actor. I challenged myself by donning Aarya in a new avatar and I hope that the audiences will appreciate her fierce, unapologetic self in the second season."