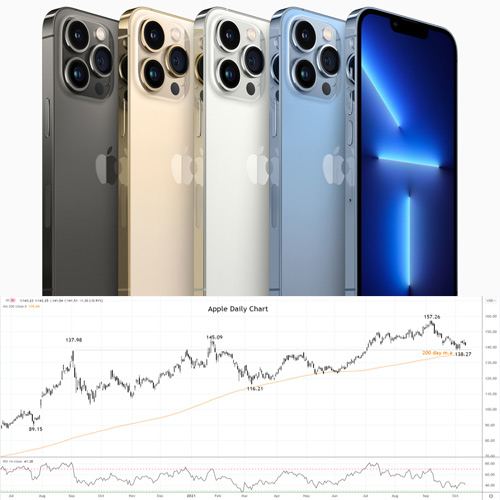 Apple forecast to make 90 million units of the iPhone 13 over the last three months of 2021 has slashed estimates by 10million units as the lead time between placing a semiconductor order and taking delivery has blown out to an average of 21.7 weeks, according to research by Susquehanna Financial group.

Chip makers have been unable to cope with a wave of demand unleashed after the Covid-19 pandemic for various reasons, including strong demand for laptops for homeworking and after automakers underestimated how quickly car sales would rebound.

The chip market is dominated by two Asian-based chip makers Taiwan Semiconductor Manufacturing Co (TSMC) and Samsung Electronics Co. In the meantime, as competitors seek to increase production, the chip shortage is expected to continue into the end of 2021.

It's still unclear what the iPhone 13 shortage will mean for Apple's next quarter worth of sales. However, the market is erring on the side of caution, and Apple shares are trading -1.33% lower at $139.63 in late trading, after falling -0.91% earlier in the day.

Apple's share price has now fallen over 10% from its $157.26 high of September, after testing horizontal support near $138.00. The fall is viewed as part of a correction rather than a change in trend. However, given this morning's news, the correction may yet test the 200-day moving average at $134.55 before the uptrend resumes.

Keeping in mind that a sustained move below the 200-day moving average would warn that a deeper correction towards $125.00 is underway.