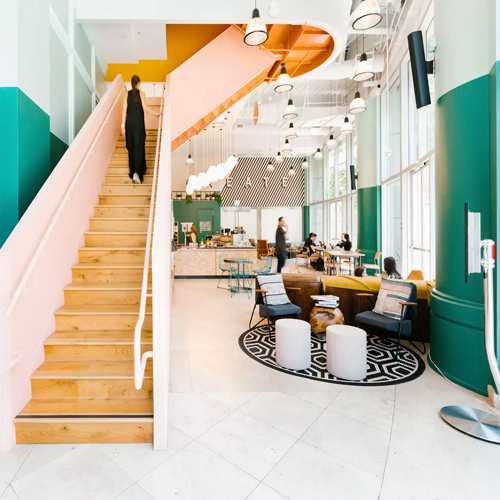 Collaborative spaces led by WeWork’s expansion in India are having a real impact on the concept of workspaces and therefore the economy. A new report assessing economic impact has outlined interesting insights that point to India’s work-life moving in a new direction.

Intensive urbanization and growing population density in a few areas have made the CBDs of metropolitan India practically inaccessible over the past two decades, especially in cities such as Mumbai, Delhi and Bangalore. NITI Aayog foresees the growth of the Indian real estate sector to jump over five-fold to $650 billion by 2040. As commercial real estate become more expensive, flexible workspaces are democratizing access by reducing the prohibitive barrier of price. This is re-injecting vibrancy to these locations and enabling businesses and individuals to benefit from proximity to business areas. In fact, the report found that 76% of WeWork members in Mumbai, 74% in Bangalore, and 67% in Delhi and did not work in the neighbourhood prior to joining WeWork.

This has also had an impact on associated activities in these areas; 9-15% of WeWork members have moved closer to the WeWork location since joining, especially in Bangalore where 1 in 4 (37%) members visit neighbourhood restaurants, cafes and businesses daily. In Bangalore, the WeWork economy directly contributed INR 1,957 crore and in total supports INR 2,002 crore (INR 44 crore indirectly) of GDP in the city.

Growing automation is driving a shift towards knowledge work, and these contributors are the biggest beneficiaries of the growth of collaborative workspaces. Flexibility and low capital commitment helps encourage entrepreneurship, with 17% of Mumbai WeWork entrepreneur-members, for instance, pursuing their first startup project at WeWork.

The flexibility, access and convenience that collaborative workspaces offer have an impact on women rising to leadership positions, and India’s WeWork members are ahead of the curve.

Led by Mumbai, where a significant 41% of senior roles (executives, senior managers, managers and sole proprietors) are held by women, followed by Delhi (29%) and Bangalore (26%), India is far ahead of the rest of Asia, where the percentage is at 23%.

Across cities, collaborative working has had a direct impact on company growth, with 65% members in Bangalore and 58% in Delhi stating that WeWork has helped accelerate growth. This is especially true among small and medium companies, who benefit from the national and international network of member companies, ease of collaboration and world-class infrastructure access. In fact, the average growth rate across SMB WeWork members in Bangalore is 25% compared to 4% for all companies in the city. The difference is even starker in Mumbai, where SMB WeWork members have grown at 37% on average compared to 2% for all companies in the financial capital.

Karan Wirwani, Co CEO WeWork India says, “WeWork as a community enables its members to collaborate with each other, which has led to the creation of efficiencies in terms of increased creativity, productivity at the workplace and innovation. This process has effects that go far beyond individual considerations as it also sparks the development and support of local communities, neighbourhoods and businesses, a culture that we as an organization look to actively imbibe, encourage and promote. This is true for WeWork across countries around the world and in India.”