Airtel records 3.8 million new subscribers in the month of September 2020 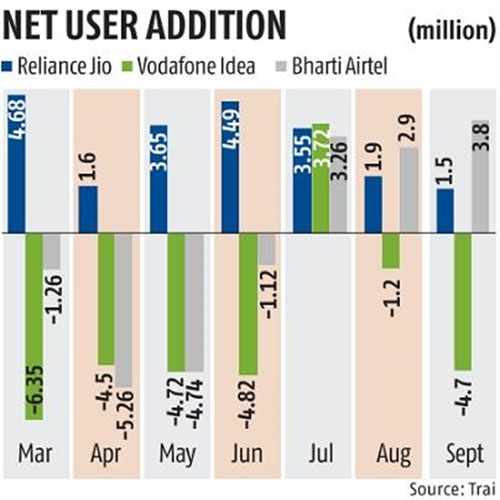 As per the latest data released by the Telecom Regulatory Authority of India (TRAI), Bharti Airtel added a record 3.77 million subscribers in September 2020, beating Reliance Jio by more than two times. The consistent approach makes Airtel to achieve the business objective.

Airtel is picking up pace again when it comes to adding new mobile subscribers, beating Reliance Jio by more than two times in September. Whereas, Jio could add only 1.46 million subscribers during the same period. On the other hand, Vodafone Idea continued to haemorrhage users, losing 4.65 million subscribers.

Total broadband subscriber base grew 1.41 per cent month-on-month, reaching 726.3 million. Broadband market share of Jio was at 55.9 per cent. Airtel had 22.9 per cent share, and Vodafone Idea had 16.5 per cent.

In the wireline segment, Jio gained the most with 303,205 additions, as against Airtel’s 66,335 million. Jio’s wireline base now is 2.1 million users, while that of Airtel is 4.4 million.