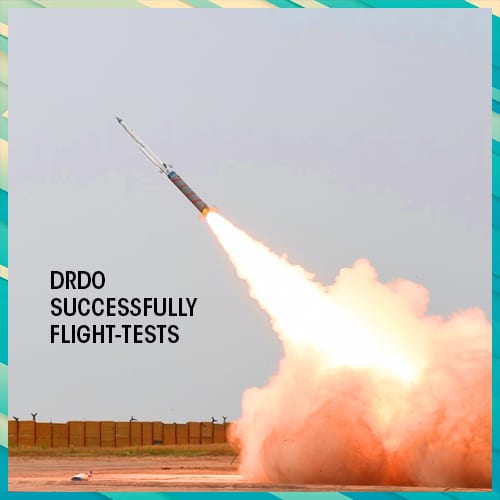 The SFDR has been developed by Defence Research and Development Laboratory, Hyderabad in collaboration with other DRDO laboratories such as Research Centre Imarat, Hyderabad and High Energy Materials Research Laboratory, Pune.

The test successfully demonstrated the reliable functioning of all critical components involved in the complex missile system and met all the mission objectives. The SFDR-based propulsion enables the missile to cut off aerial threats at very long range at supersonic speeds.

With this successful trial, India now joins a handful of countries having such technology in the world. Defence Minister Rajnath Singh has congratulated DRDO for the successful trial of SFDR. He termed it as an important milestone towards development of critical missile technologies in the country.

The performance of the system has been confirmed from the data captured by a number of range instruments like Telemetry, Radar, and Electro-Optical Tracking Systems (EOTS) deployed by ITR.

Last year in March, DRDO had carried out a successful flight demonstration based on Solid Fuel Ducted Ramjet technology. The demonstration further provided the DRDO with an advantage enabling it to develop long-range air-to-air missiles, informed the Defence Ministry after the test.

Complimenting the teams involved in design, development and testing, Secretary, Department of Defence R&D and Chairman DRDO Dr G Satheesh Reddy said, “With the successful trial of SFDR, the range of air-to-air missiles can be enhanced.”