The Past, Present and Future of Handset Market 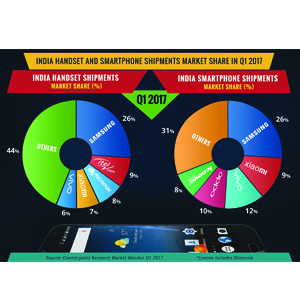 India is currently the second-largest telecommunication market and has the third-highest number of Internet users in the world. Overall, mobile handsets and the smartphone segment witnessed a healthy growth of 6 per cent and 15 per cent YoY, respectively in Q1 2017, and, with the availability of 4G data, consumption on handheld devices is increasing significantly. With this, the mobile services market revenue in India is expected to touch US$37 billion in 2017.
With the government’s favourable regulatory policies, smartphone subscription in India is expected to increase four-fold to 810 million users by 2021, while the total smartphone traffic is expected to grow seventeen-fold to 4.2 Exabytes (EB) per month by 2021, according to the Ericsson Mobility Report.

The Indian smartphone shipment to India was up by 15 per cent in March quarter, reaching 29 million units. The Chinese brands have taken 50 per cent of the market share, as the market recovered from the effects of demonetization in the quarter ended March 2017. According to IDC India, China-based vendors captured 51.4-per cent share of the smartphone shipments, while the share of Indian vendors dropped from 40.5 per cent to 13.5 per cent in the same quarter year on year.

Worldwide, smartphone shipments have grown to 4.3 per cent in 1Q17, which was slightly higher than IDC's previous forecast of 3.6-per cent growth. The data from IDC claims that a total of 347.4 million smartphones were sold in the first quarter of 2017 worldwide. Though the market had been deemed sluggish, consumers continue to show demand for smartphones, flagships in particular.

India is so big. Maybe in ten years, we can have a factory in every state.
Terry Gou
Founder & Chairman
Foxconn

It is true that the smartphone market is growing at a rapid pace – penetration in the rural areas is much higher than urban areas registering a y-o-y growth. There is also an increase in the mobile Internet users, but no mobile phone company takes the responsibility to educate on the awareness of app-based security and privacy issues are still quite low in the country. No company writes about the statutory remarks on the precautions to be taken on downloading multiple apps. According to experts, while such behaviour is understandable, such ignorance poses numerous threats to smartphone users.

The evolving landscape of cybersecurity as mobile (Android smartphone) and IoT are increasingly at the risk of attack and this will impact the growth of smartphone business globally. Smartphones were by far the most vulnerable devices, with infections that rose nearly 400 per cent in 2016. Attacks on smartphones represented 85 per cent of all mobile device infections in the second half of the year, according to the report by Nokia.

Ransomware attacks are joining a growing list of threats to mobile phone security. Imagine turning on your smartphone to send a text and finding this threatening notice instead.

Success Mantra
Oppo and Vivo simply offered new features and higher specifications at lower prices, much like China's Xiaomi. This works because Apple is a global business and won't cut prices to match local conditions in poor countries like China and India.

Smartphone penetration is likely to grow by four times over the next decade. With the emergence of various Chinese players having come here, there will be a downward push in the pricing of smartphones. With the rise of digital communications by e-commerce and digi payment, 70 per cent of India’s population is in the rural areas and is below the age of 45. There is very less awareness about the mobile phone security in the tier-II and tier-III cities and rural areas.

To meet the rising demand in the Indian smartphone market, Xiaomi has invested in its second manufacturing unit at Foxconn’s Sri City facility in Andhra Pradesh. With this, Xiaomi has entered to the top Five club. Indian companies, which have traditionally dominated the feature phone market, now face challenges from the Chinese players in this segment, too. The biggest question is on how the Indian market holds the potential for Indian smartphone manufacturers. For most Indian handset makers who are facing survival challenges, the only option left is to raise funds to build local capabilities and marketing, although it may be a difficult option. All the Indian brands Micromax, Intex, Karbonn and Lava were pushed out of the top five smartphone rank by Xiaomi, Oppo, Vivo and Lenovo. Samsung continued to retain the top spot, followed by Xiaomi, Vivo, OPPO and Lenovo. The top five brands contribute about 70 per cent of the total smartphone market. LTE is now a default feature for smartphones in India. Samsung has shipped close-to 80 million devices in the first quarter of 2017, up from 77.5 million in the previous quarter. However, Apple remains as the premium brand.According to the latest research from Counterpoint’s Market Monitor service, smartphone shipments in India grew by a healthy 15 per cent annually in Q1 2017. Commenting on the findings, Karn Chauhan, Research Analyst at Counterpoint Research, said, “India’s smartphone market is witnessing a focus shift in distribution strategy by major brands. Offline brands like OPPO, Vivo and Gionee have now started focussing on online channels as well to gain extra market share. Online only brands like Xiaomi and Motorola are moving fast into offline markets to widen their reach to the mass market, addressing consumers in the tier-II and tier-III cities.” He further added, “While the Chinese smartphone brands are adopting multiple channel strategies to maximize growth, another Chinese brands iTel is disrupting the other half of market (feature phones) by climbing to the number two overall mobile phone brand for the first time. iTel, which is also the number one mobile phone brand in Africa, is now leveraging its successful low-cost strategy, effective distribution and scale to grow in the Indian market.”

The BBK Electronics-owned both the Chinese handset brands Vivo and Oppo are relying heavily on sports to penetrate into their targeted market – the Indian youth. “Vivo with sports has been able to penetrate into its targeted segment, which is youth, in India,” says Vivek Zhang, Chief Marketing Officer, Vivo India. The companies were founded separately and compete against each other.Certain aggressive strategies done by the mobile phone vendors like Gionee play with "Battery and Selfie", OPPO sells on "Selfie expert" and Vivo focusses on "camera and music".

There is a growing challenge for the local manufacturing capabilities. Government has to come out with policies for the local manufactures, on how could they give them a price edge and provide opportunities to bounce back. The Indian brands are expanding to overseas markets for growth as they are losing their footing in the home market, as per Counterpoint Research.

Mobile manufacturers to continue to get incentives, Government assures industry The GST Council has fixed the tax rate on handsets at 12 per cent, which will raise the prices of handsets by 4–5 per cent. It will have an impact on domestic manufacturing and the Government will need to continue incentives for locally manufactured mobile phones to further push the domestic manufacturing ecosystem. An assurance has been given by the Government to the handset industry that making phones in India will continue to be incentivized even under the Goods and Services Tax regime. According to Aruna Sundararajan, Secretary, IT and Telecom, “The Ministry is pushing hard to come out for imposing a basic customs duty (BCD) on top of GST rate on imported devices to ensure that making phones locally would continue to be cheaper for companies compared with imports. Secondly, as per the Indian Cellular Association (ICA), 17.5 crore handset units valued at Rs.90,000 crore were produced locally in 2016-17, compared with 11 crore handsets worth Rs.54,000 crore in the previous year. The growth is expected to accelerate if the incentives continue. As much as 80 per cent of the phones sold in India during the January-March quarter were locally made, as per Counterpoint Research.