THIS IS YOUR COVID-19 WAKE-UP CALL: IT IS 100 SECONDS TO MIDNIGHT 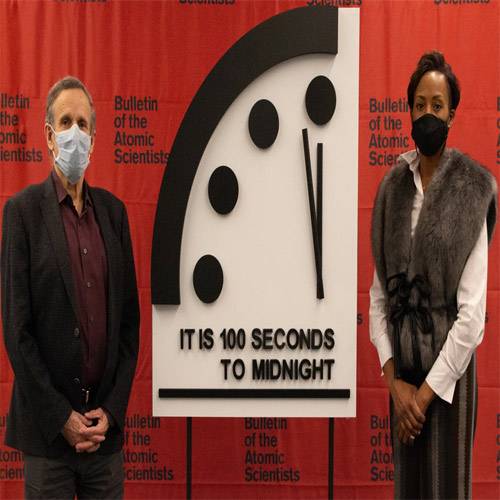 The COVID-19 pandemic will end up killing well over two million people around the globe. The mishandling of this grave global health crisis is a “wake-up call” that governments, institutions, and a misled public remain unprepared to handle the even greater threats posed by nuclear war and climate change. Given this and the lack of progress in 2020 in dealing with nuclear and climate perils, the Doomsday Clock remains as close to midnight as it has ever been – just 100 seconds to midnight.

In December 2020, the Bulletin of the Atomic Scientists marked its 75th anniversary. Founded in 1945 by Albert Einstein and University of Chicago scientists who helped develop the first atomic weapons in the Manhattan Project, the Bulletin of the Atomic Scientists created the Doomsday Clock two years later, using the imagery of apocalypse (midnight) and the contemporary idiom of nuclear explosion (countdown to zero) to convey threats to humanity and the planet. Over time, the Clock has become a universally recognized indicator of the world’s vulnerability to catastrophe from nuclear weapons, climate change, and disruptive technologies in other domains.

Dr. Rachel Bronson, president and CEO, Bulletin of the Atomic Scientists, said: “The hands of the Doomsday Clock remain at 100 seconds to midnight, as close to midnight as ever. The lethal and fear-inspiring COVID-19 pandemic serves as a historic ‘wake-up call,’ a vivid illustration that national governments and international organizations are unprepared to manage the truly civilization-ending threats of nuclear weapons and climate change.”

Former California Governor Jerry Brown, executive chair, Bulletin of the Atomic Scientists, said: “The US, Russia and the world’s nuclear powers must stop shouting at each other. It’s time to eliminate nuclear weapons, not build more of them. Likewise, with climate change: the US, China and other big countries must get serious about cutting lethal carbon emissions – now. It’s 100 seconds to midnight. Wake up!”

Dr. Steve Fetter, professor of public policy, University of Maryland, and Science and Security Board member, Bulletin of the Atomic Scientists, said: “The modernization and expansion of nuclear arsenals in multiple countries, combined with the lack of diplomatic efforts to reduce nuclear risks, have increased the likelihood of catastrophe. Development of hypersonic glide vehicles, ballistic missile defenses, and weapons-delivery systems that can use conventional or nuclear warheads raise the probability of miscalculation during a crisis. By our estimation, the potential for the world to stumble into nuclear war—an ever-present danger over the last 75 years—increased in 2020.”

Dr. Susan Solomon, Lee and Geraldine Martin Professor of Environmental Studies at the Massachusetts Institute of Technology (MIT), founding director, MIT Environmental Solutions Initiative, and Science and Security Board member, Bulletin of the Atomic Scientists: “The pandemic-related economic slowdown temporarily reduced the carbon dioxide emissions that cause global warming. But over the coming decade fossil fuel use needs to decline precipitously if the worst effects of climate change are to be avoided. Instead, fossil fuel development and production are projected to increase. Atmospheric greenhouse gas concentrations hit a record high in 2020, one of the two warmest years on record. The massive wildfires and tropical cyclones of 2020 are illustrations of the major devastation that will only increase if governments do not significantly and quickly amplify their efforts to bring greenhouse gas emissions essentially to zero.”

Hiroshima Governor Hidehiko Yuzaki, Japan, said: “Despite nuclear abolition being the long-awaited wish of all A-Bomb survivors, there are still more than 13,000 nuclear weapons in the world, with nuclear states continuing to modernize their nuclear forces. Moreover, nuclear disarmament continues to stagnate, further exacerbating global tensions.”

President Ellen Johnson Sirleaf, co-chair, WHO Independent Panel for Pandemic Preparedness and Response, Nobel Peace Prize recipient, former President of Liberia, and member, The Elders, said: “COVID-19 is a terrible warning against complacency in the face of global threats to all human life. The past twelve months have served to reinforce the messages that the Bulletin of the Atomic Scientists has been saying for decades: that it is only through collective action and responsible leadership that we can secure a peaceful and habitable planet for future generations. The new Presidency of Joe Biden has a chance to reassert US commitments to the values and institutions of multilateralism; there is no other way for humanity to overcome the dangers posed by pandemics, climate change and the risk of nuclear war.”

Dr. Asha M. George, executive director, Bipartisan Commission on Biodefense, and Science and Security Board member, Bulletin of the Atomic Scientists, said: “Humanity continues to suffer as COVID-19 spreads around the world. In 2020 alone, this novel disease killed 1.7 million people and sickened at least 70 million more. The pandemic reveals just how unprepared and unwilling countries and the international system are to handle global emergencies properly. In this time of crisis, governments too often abdicated responsibility, ignored scientific advice, cooperated or communicated ineffectively, and consequently failed to protect the public health and welfare of their citizens.”

What steps should be taken to address nuclear, climate, and other major threats? The following are among the key recommendations: