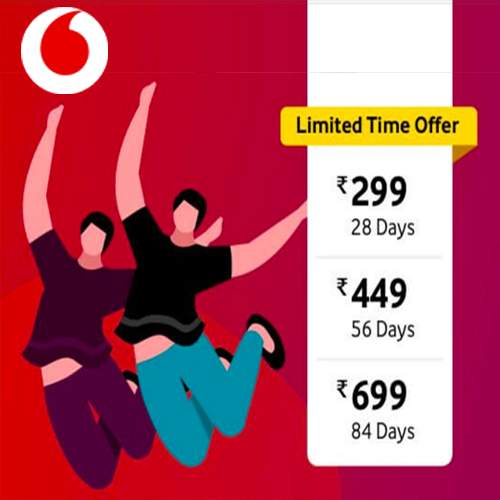 Vodafone has come up with its double data benefits to its prepaid users once again. The telecom operator in April introduced these benefits in its 14 circles only but now it is reintroduced across India. There are five eligible plans for the double data benefits. The telco has listed plans including Rs 299, Rs 399, Rs 449, Rs 599 and Rs 699.

Andhra Pradesh and Assam users will get the benefits on all five plans whereas only three plans are being offered in this scheme in several circles including Tamil Nadu and Kerala. Vodafone Idea earlier also launched its double data offer on the Rs 249, Rs 399, and Rs 599 prepaid plans in March 2020. These plans were available in all 22 circles. However, the company later decided to take down the offer for eight of these circles. Further, the Rs 249 recharge plan was taken out of the offer. Later, the offer was reduced to only 9 telecom circles in India.

As per the new plans, user will get 2GB additional data benefits with the Rs 299, Rs 399, Rs 449, Rs 599 and the Rs 699 prepaid plans. On the lowest Rs 299 plane, this translates to a total of 4GB data every day. The plan also includes unlimited voice calls and gives users 100 SMS messages per day. The validity of this plan is 28 days.

The Rs 499 plan users gets 4GB data daily and the additional 2GB. There is unlimited calling and 100 SMS per day here as well. The validity of this Vodafone Idea plan is 56 days. Lastly, the Rs 699 pack also has the daily 2GB extra data bringing the total to 4GB daily data. With unlimited calling and 100 messages per day, the validity of this plan is 84 days.

The company has restricted its double data offer to three plans including the base Rs 299 plan, Rs 449 and Rs 699 plans in Bihar, Chennai and Gujarat, as per news reports. The company also offers additional benefits including access to Vodafone Play and Zee5. All five offer plans are available in Andhra Pradesh, Assam, Delhi, Jammu and Kashmir, Kolkata, Madhya Pradesh, Mumbai, Odisha, Rajasthan, UP East, and West Bengal.